Naproxen is a medicine that falls into the category of NSAIDs. The NSAIDs is an abbreviation of Nonsteroidal anti-inflammatory agents which are medicines that have 3 different effects on its users. The first effect is the anti-inflammatory effect which reduces inflammation in its users. The second effect of the NSAIDs is to relieve the pain and the final effect is the antipyretic effect. The Naproxen is hence able to help the users with all the above-said effects. It is normally used by people who are suffering from inflammation caused because of arthritis, ankylosing spondylitis, tendinitis etc. The Naproxen can reduce the production of hormones that results in pain and inflammation and hence support people suffering from these conditions to reduce their pain. 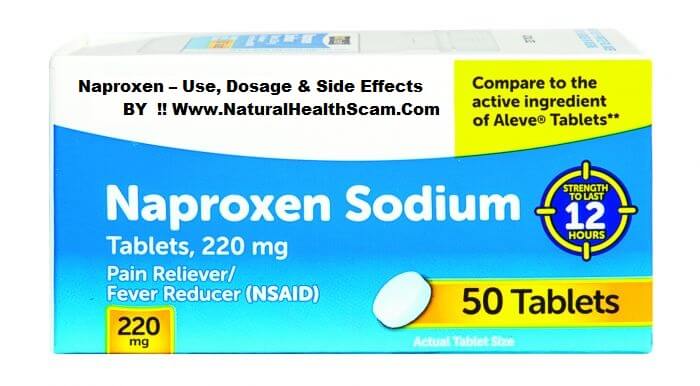 This medicine normally comes in the form of tablets and should be taken orally. It is also available in a liquid form as well.Like most of the other medicines, the Naproxen is also suitable if taken under the guidance of a Doctor. Long-term consumption of this medicine may result in an increased chance of stroke or heart attack. A Doctor is a right person who can guide you with the exact dosage of this medicine along with the course of consumption. So, never try to start using it as per your own convenience and stop it quickly. Both these situations may lead to serious health hazards.

Things to Remember While Using Naproxen: –

For any person planning to take a medicine, there are certain things that they should be aware of. Among this, the most important thing is to know whether the medicine can work for a person like him or not. For example, the Naproxen is not supposed to be used by people who are just recovered from a heart attack or stroke. This medicine is also not good for people who are planning to undergo a bypass surgery or the ones who have just completed it.This medicine is also not recommended for people suffering from asthma. People who are using the Naproxen for a long time is seen to have increased risk of heart attack and hence this medicine should be taken only when it is necessary and that too under the guidance of a Doctor.

Those who are regular users of the Naproxen should make sure that this medicine is consumed almost at the same time every day. The tablet form of this medicine must be swallowed along with water and make sure not to crush or chew it. Consulting a Doctor and informing him about all the different type of medicines that you use or recently being used is necessary before starting a new course of this medicine. This will help them to advise you on whether you are eligible to use the medicine in that situation or not.In most cases, users can continue their same diet while using the Naproxen, unless advised by a Doctor for some changes in it. Take this medicine in the exact dosage as instructed by the Doctor. The over usage of the Naproxen Sodium will not result in immediate results rather than cause serious health problems to the users.

The recommended Naproxen dosage is 2 to 3 times a day, but take a final call on this after consulting with your Doctor.If using as a pain killer and not as a regular medicine, try to take it before the pain become severe. Otherwise, it will not provide the expected results. Also, note that this is not just a painkiller that you can simply refer to your known persons. The effect of the medicine on others will not be the same as on you. If you are already under medication for some other disease or just gone through some other treatments, don’t forget to inform this to your Doctor prior to the start of Naproxen.

The medicines are manufactured with the intention to make the people healthier and get resisted against various diseases. But if taken in the wrong way, the same medicine can be of reverse effect in the user. The Naproxen is also such a medicine. The Doctors are prescribing it to their patients knowing that the Naproxen is having some bad effects on the body of the user. But they prescribe it to them on conditions when the benefit provided by them is much more than that.So, Naproxen sodium vs ibuprofen uses is a medicine which should be used in such situations only and a Doctor is the only person who can confirm whether it can be used or not. Hence take this medicine under the guidance of a Doctor and never start using it by yourself.