Trazodone is a class of medications called serotonin modulators, which work by moderating levels of serotonin in the brain. The Food and Drug Administration (FDA) first approved in 1981 under the brand name Desyrel. 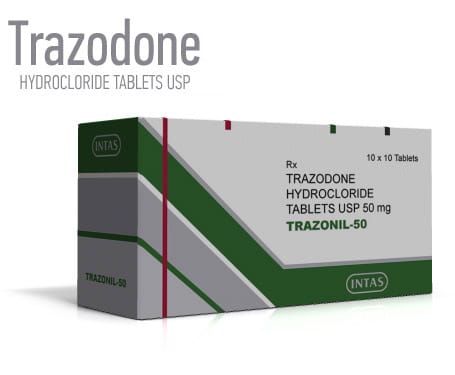 Why Trazodone is used:

Trazodone is used to treat depression in adults. Besides treating depression, doctors may also prescribe trazodone to treat anxiety, schizophrenia, or uncontrolled movements that occur as a side effect of other medications. Doctors may also prescribe trazodone to treat insomnia or other sleep disorders. A study in the American Journal of Geriatric Psychiatry in 2014 found the drug to be very effective in treating sleep disturbances in people with Alzheimer’s disease. trazodone dosage improved nighttime sleep but did not affect thinking or brain function. Taking the drug did not lead to daytime sleepiness or naps.

Before taking Trazodone, make sure you tell your doctor if you have:

Anyone taking the drug should let their doctor know about any family history of suicide or suicidal attempts.

If you are a man, let your doctor know if you have any problem with an erection that will not go away.

It’s important to tell your doctor if you have symptoms of aggression, irritability, panic attacks, extreme worry, restlessness, and acting without thinking, abnormal excitement, or any thought of suicide when you start the drug.

You should also let your friends and family know if you have these symptoms or worsening symptoms of depression.

If you have any thoughts of suicide or if a friend or family member thinks you are acting strangely, call a doctor right away.

Stopping trazodone suddenly can cause withdrawal symptoms that include anxiety, agitation, and difficulty sleeping.

It isn’t fully understood how trazodone works. It may increase serotonin activity in your brain. Serotonin is a chemical that helps maintain mental balance.

Consume trazodone as prescribed by your doctor. The drug comes in different forms. Each form is released into your body in different ways, so the dosage for each is different. Take only the form that your doctor recommended you and take it exactly in the same amount. Follow the preventive measure and directions given in the prescription. Do not take this medicine in larger or lesser amounts as prescribed by the physician nor for a longer period of time than recommended.

The drug hasn’t been studied in children. It shouldn’t be used in people younger than 18 years of age.

Trazodone also might cause some people to have auditory hallucinations while taking the drug.

Trazodone is a drug which should be consumed carefully and on time. It should be taken in appropriate amounts as disturbed intake of the drug can severely affect your body. Report the side effects to your physician as soon as possible.