Having access to clean drinking water is one blessing that is, sadly, usually taken for granted. No one will truly understand the severity of living standards in which you’re unable to use or even drink clean water. It’s true that we’ve come a very long way from those days; most of our cities and villages now enjoy purified water that’s being monitored and regulated by health authorities. However, even under such strict regulations, many water contaminants can find their way into our drinking water.

Not all contaminants are obvious in our water. Some have no smell or taste, which makes our exposure to waterborne diseases quite easy and possible. A good place to start protecting yourself and your family from various contaminants would be to install water filters in your household. However, a much simpler practice would be to get a water dispenser, which you can read more about and decide which option best fits your needs. A water dispenser will make using bottled water much easier and accessible, eliminating the need for using tap water for drinking.

Must Read What Makes the Water Rower So Hyped Up? 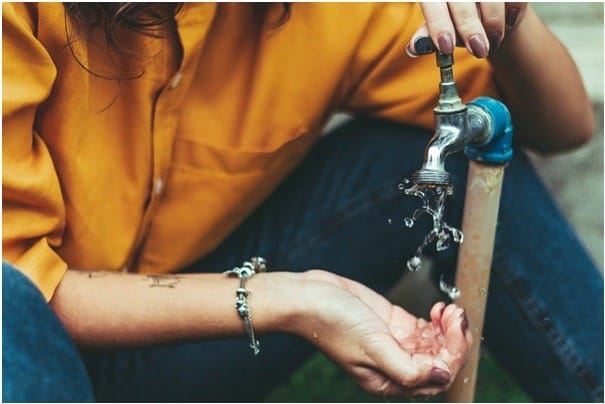 The reason why you should start finding drinking alternatives is that tap water can contain many contaminants. The contaminants present can result in a plethora of diseases, the most common of which are the following.

According to the Center for Disease Control and Prevention (CDC), Giardia is one of the most prevalent waterborne diseases as it is present in almost every region in the world. It can infect both humans and animals, with drinking water contaminated by the fecal substances of another infected human or animal being the most common way to get the infection. Once infected, the person will start showing symptoms of diarrhea, gas, greasy stool, nausea, fever and dehydration.

Hepatitis A is another infectious disease that can be acquired by drinking contaminated water. This infection goes straight to the liver, resulting in many symptoms such as fatigue, jaundice, abdominal pain, nausea, vomiting, loss of appetite, and sudden fever. However, hepatitis A is a viral infection that can be prevented by vaccination. In the case that an unvaccinated person becomes infected, their body builds immunity against it for life and they wouldn’t be infected once again.

Wherever poor hygiene exists, the chances of getting dysentery become multiplied, which puts a huge emphasis on the importance of washing your hands properly and following good personal hygiene. Dysentery is a disease that’s more widespread in developing countries with poor hygiene. Infection can occur from drinking contaminated water, after which the symptoms present themselves in diarrhea that contains blood, mucus, or both. Experiencing such symptoms means that seeking medical attention is crucial, as it can be a fatal disease.

Arsenic is found in nature, albeit in small amounts, and is used in industrial zones in abundance. However, it’s not something that should be present in drinking water under normal conditions. The presence of arsenic in drinking water means that it’s found its way in our water supply systems from the waste drainage pipes. Prolonged exposure to arsenic can result in Arsenicosis; a poisoning condition that manifests as painful skin lesions that can turn cancerous.

Similar to arsenic, lead can find its way into our water supply through the pipes. It can either be the result of industrial waste seeping into our water systems or due to the natural disintegration of old water pipes that contain lead. However, lead is quite dangerous to ingest, even if in small amounts. Lead poisoning is particularly detrimental to children, resulting in nervous system disorders, organ damage, anemia, kidney diseases, reproductive disorders, in addition to other diseases.

There are many strains of e-coli, some of which are actually essential for proper functioning intestines. However, other strains of these bacteria can find their way from animal feces into our drinking water. When that happens, the symptoms of e-coli infection can be similar to that of dysentery and waterborne diseases, manifesting mainly in diarrhea and fever. On the other hand, e-coli can affect children, elders, and those with compromised immune systems differently and much more seriously, which can become life-threatening without medical intervention.

The mere thought of having unknown dangers lurking in your drinking water can be scary, sadly enough, it’s quite a real possibility. Starting from heavy metals, like arsenic and lead, to a plethora of germs and microorganisms, such as e-coli, our drinking water can be contaminated from multiple sources. The best way to protect ourselves from getting infected is to practice good hygiene and be pickier when it comes to the sources of drinking water. Better yet, installing filters or switching to bottled water for drinking may help save our lives and maintain our health.